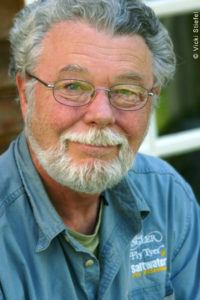 Lexington High School’s Class of 2018 and 2019 online poetry anthologies are dedicated to Bill Tapply (a graduate of LHS, a beloved LHS teacher for 28 years and a successful author of 33 mystery novels and 14 works of nonfiction about the outdoors and writing) and to The William G. Tapply Memorial Fund, whose support has helped the Student Publishing Program  fully fund and develop a platform for publishing online anthologies that can now be provided for free to LHS for this and all future classes.

Friends of a longtime Lexingtonian are merging with supporters of a high school writing program, to fund an important piece of the sophomore English curriculum.

Bill Tapply spent his childhood here, and graduated from the High School in 1958. He later became well-known for his mystery novels, and published thirty during his lifetime in addition to at least ten nonfiction books which mostly deal with fly fishing. And within Lexington, he was also admired for his abilities in the classroom as a teacher. He returned to town for a quarter-century as an English and social studies teacher, and house master, before moving on to Emerson College, Clark University, and a home in Hancock, N.H.

Tapply died of leukemia in July of 2009, and almost immediately, his high school classmates began thinking of how they could honor him within the town. The LHS Class of 1958 is closely knit, and Tapply was a prominent member. There were much smaller classes then, with about 200 seniors graduating in 1958.

It is “a very strong class,” according to member John Oberteuffer. “We were all very supportive of Bill and his writing. We have almost all bought and read his books.” Other classmates have died, “but Bill was the most prominent one so far,” Oberteuffer says. His death “had quite an effect on us.”

Other classmates have become writers, too. Jon Anderson, a poet and longtime associate professor at the University of Arizona, published seven volumes (he died in 2007). And Oberteuffer himself published his first work a couple years ago, a mystery novel which he consulted with Tapply about.

There are around 10 classmates in particular who get together for lunch once in a while, including Oberteuffer and Mike Fosburg. They brainstormed ways to honor Tapply, and by the Spring of 2010 had formed the idea of the William G. Tapply Memorial Fund.

Any size donation is greatly appreciated by Bill’s friends and classmates, by the leaders of the Sophomore Writing Program, and above all, by the sophomores themselves.

Those interested in contributing to The William G. Tapply Memorial Fund can write a check to the Town of Lexington, memo line “For the Tapply Fund,” and mail it to: Lexington Public Schools, Business Office, 146 Maple Street.